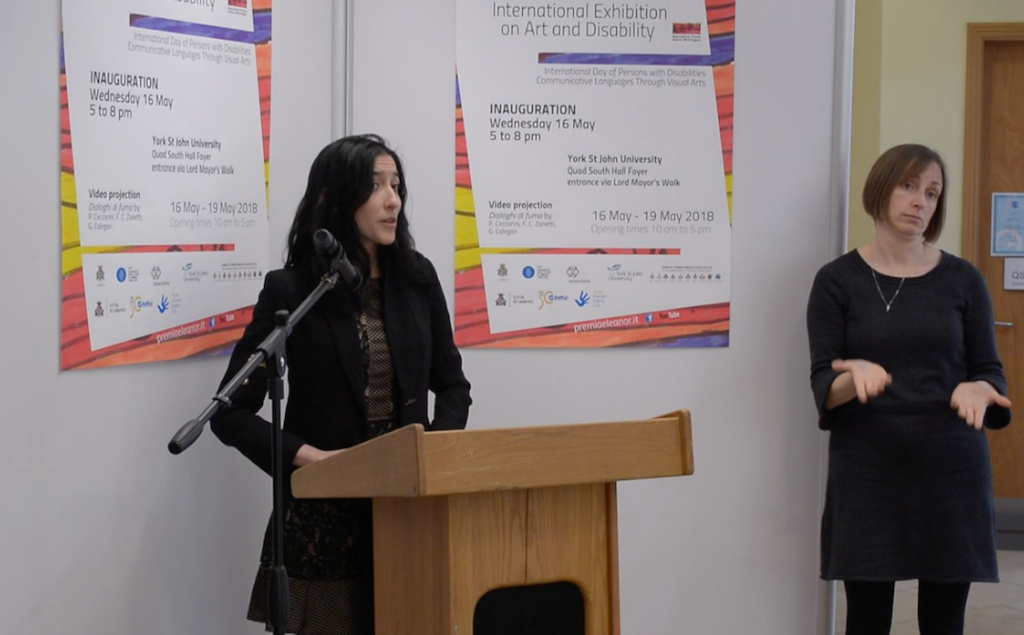 Back in May, I had the honour to be invited to give a short introductory speech as part of the Associazione Premio Eleanor Worthington International Exhibition on Art and Disability that took place at York St. John University in York (UK).

The exhibition showcased work submitted for the prize as well as accompanying documents on the history and activities of the Associazione.

The Eleanor Worthington Prize has two categories: one for secondary schools and another one for tertiary education and they champion pieces of art (in the broadest sense of the word) that reflect on disability and inclusion.

This year’s tertiary education prize ceremony is scheduled for the 3rd December which is the UN International Day of Persons with Disabilities and is centred on the theme of Disability Pride and Independent Living. Participants are encouraged to explore the theme in their submissions and the deadline is 13 November 2018. It’s great to see that they are also asking participants to provide a short audio description of the submitted pieces (and I’ve been told that it was the EAD Conference on Accessibility in Film, Television and Interactive Media that encouraged this addition!).

For students from British institutions, the first prize is one week’s board and lodging at the University of Urbino, which sounds very exciting! I actually got to meet some of the winners of last year’s competition and it was incredible to see the various takes on the theme!

For those of you interested here’s an abridged version of the speech I gave:

I was asked today to talk to you about Universal Accessibility and what it means to the world of art, a topic that is very important to me personally and as part of my work. I read an article recently that stated that 67% of people were uncomfortable talking to people with disabilities. 67%…that’s shocking but maybe not surprising…most of us have been raised in environments where encountering someone with a disability was unusual and maybe we never even thought about it. Many people don’t think about it and they go through life with a concept of disability that is close-minded and highly inaccurate. Only 2 weeks ago I was presenting my work on film accessibility and someone told me that all visually impaired people were elderly and they didn’t use or like technology. I was shocked and angered by this statement and tried to explain to this person that he was wrong that people with visual impairments are incredibly diverse, but not sure I managed to convince him.

I have been in the last few years working on a concept that stems from the idea of Universal Accessibility, by proposing that if we design the sound of films and television programmes in a more inclusive way we could create experiences that can be shared by everyone regardless of their sight condition. When I first talked about this a few years back I was told I was painting the picture of a ‘utopia’ and I had to lower my expectations. But I think they were wrong, I think today more than ever we have to raise our expectations, we have to push ourselves and our actions towards equality and we need to believe that our society can be better, otherwise, we are going to be stuck.

I love that this prize is focused on educational institutions, our school and university students are the key to making sure society changes for the better. I dream of a future in which we don’t think about disabilities and instead we think about different ways of experiencing the world.