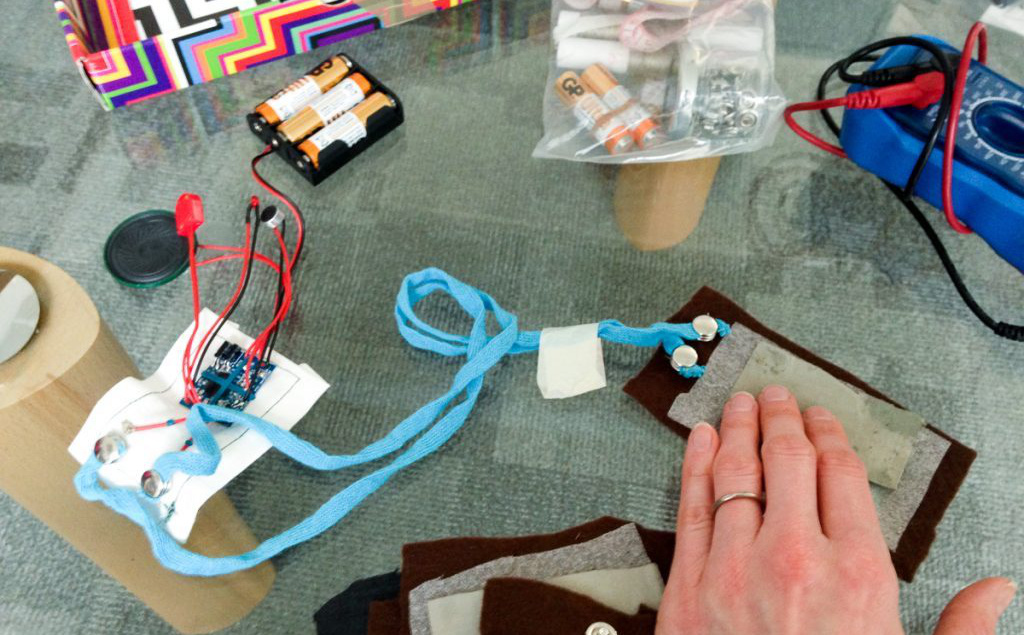 How can we combine touch and sound...

– as well as visual qualities – in interaction? A guest post by Emilie Giles.

We have been working with people who are blind and visually impaired to create their own, personal, soft, interactive objects with the use of electronic textiles (e-textiles). These are fabrics, yarns and threads that incorporate conductive materials such as silver, so that they can be combined with electronic components to act as sensors or switches. Textiles by their very nature are something we want to touch, and so e-textiles offer potential for rich, tactile interaction that embraces texture and gesture.

In collaboration with BucksVision, a charity based in Buckinghamshire that supports blind and visually impaired people, we have run a series of creative workshops over six successive Friday afternoons. Participants varied in terms of their experiences of crafting, age, interests, and visual capabilities. By the end of the workshops, each participant had designed and created an interactive textile object reflecting a personal story or something important to them. The objects used e-textiles and a small re-recordable device, allowing them to associate customised recordings linked to their story or memory with textile ‘switches’ that also formed a pictorial and textural component of their design. When users stroke or touch the e-textile switches, they trigger the recordings associated with them.

These workshops built on previous research through which we developed an open toolkit approach for running e-textile weaving workshops with blind and visually impaired people. They are part of a larger body of PhD research (by Emilie Giles at The Open University), exploring touch, e-textiles and personal association for users with visual impairments. Although many have designed technology for visually impaired users, we are interested in designing interactive objects with them – exploiting the potential of e-textiles to support creativity, not just provide functionality.

Because it is important to us to ensure that users have agency over what they do, we have taken a participatory design approach. The workshops are hands-on making sessions, during which participants can explore materials and create an art object which they both design and build. It is a collaborative process, and we have been learning from them as much as they have from us. In the course of the workshops, the participants learn enough to construct their own e-textiles, in pursuit of their own creative goals. 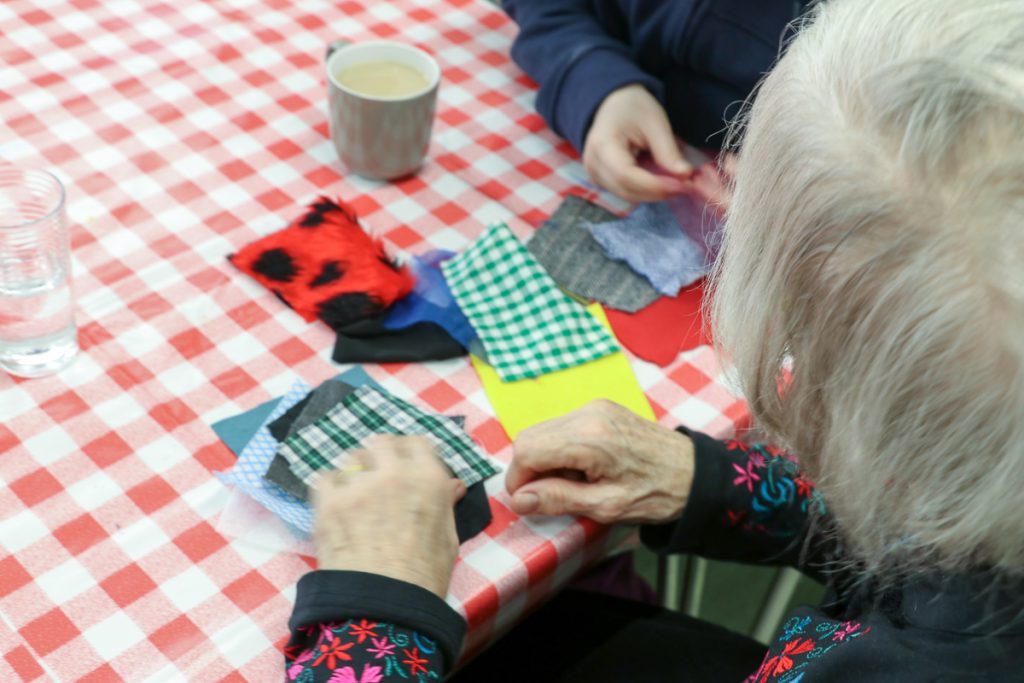 To embed sounds into their textile work, and to make it interactive, the participants worked with small re-recordable devices (similar to those found in greeting cards). However, instead of working with the usual ‘hard wires’ in these devices we hacked the devices to use ‘soft wires’ instead. These were made from conductive thread, tube yarn (as insulation) and metal poppers (to form connections). These soft wires would form the connection between the ‘soft circuit buttons or e-textile switches, and the re-recordable devices. 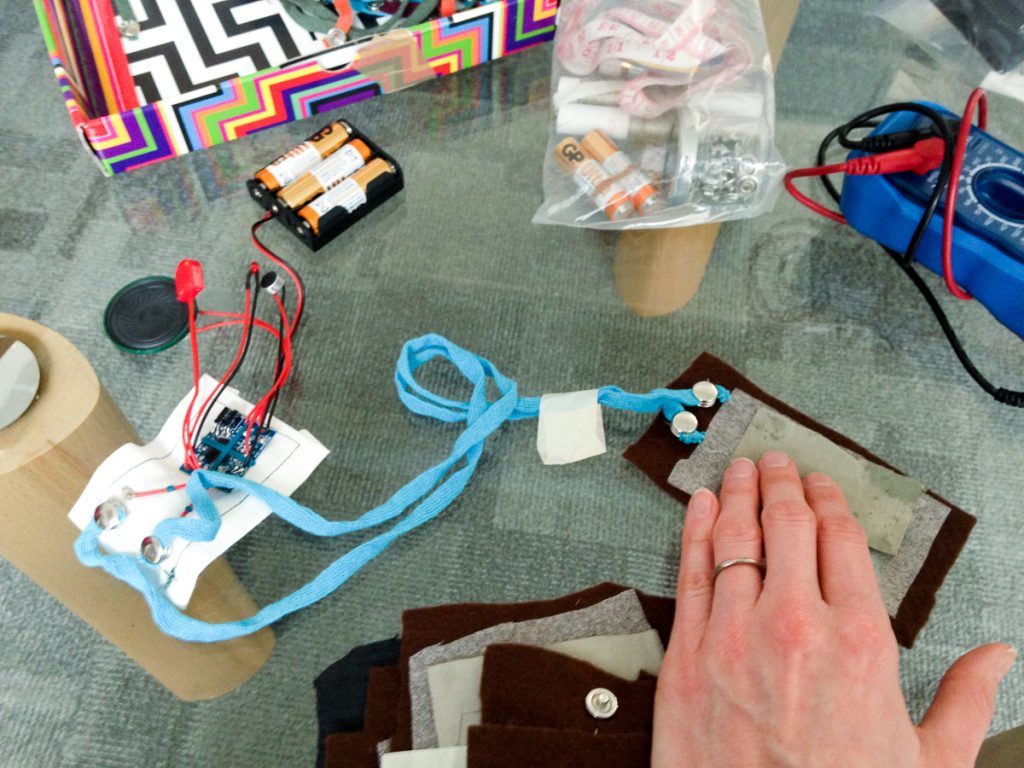 Not only did the participants learn how to make soft circuits, but they also practiced weaving, finger knitting, and felt making, producing materials which they were free to incorporate into their final pieces if they wished. We explored these crafting techniques to see which are accessible and feasible with limited sight, mainly relying on touch. 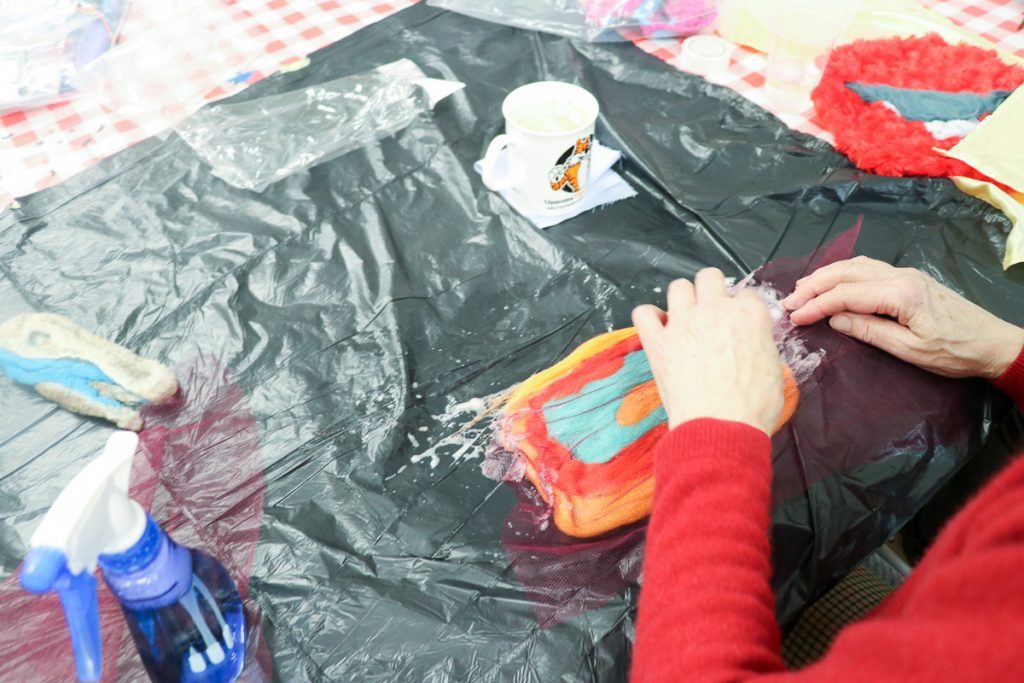 Some of these crafting techniques were found to be more challenging than others, but every participant was different, so what one person enjoyed and found they could do, another found not so enjoyable and very challenging.

By the last session, each participant had constructed a set of soft-circuit buttons to trigger their recordings. The top layer of the soft-circuit buttons was a fabric covering designed by the participants, so that the texture, colour and shape evoked some element of their story and related to the sound recordings. The variety of ‘look and feel’ of these buttons was impressive, including furry hearts, a fabric trawler, a glittery star and a pet bird. Some participants made representational objects, others were happy with abstractions.

These soft-circuit buttons were composed onto a backing fabric, held in place with adhesive or fabric tape. 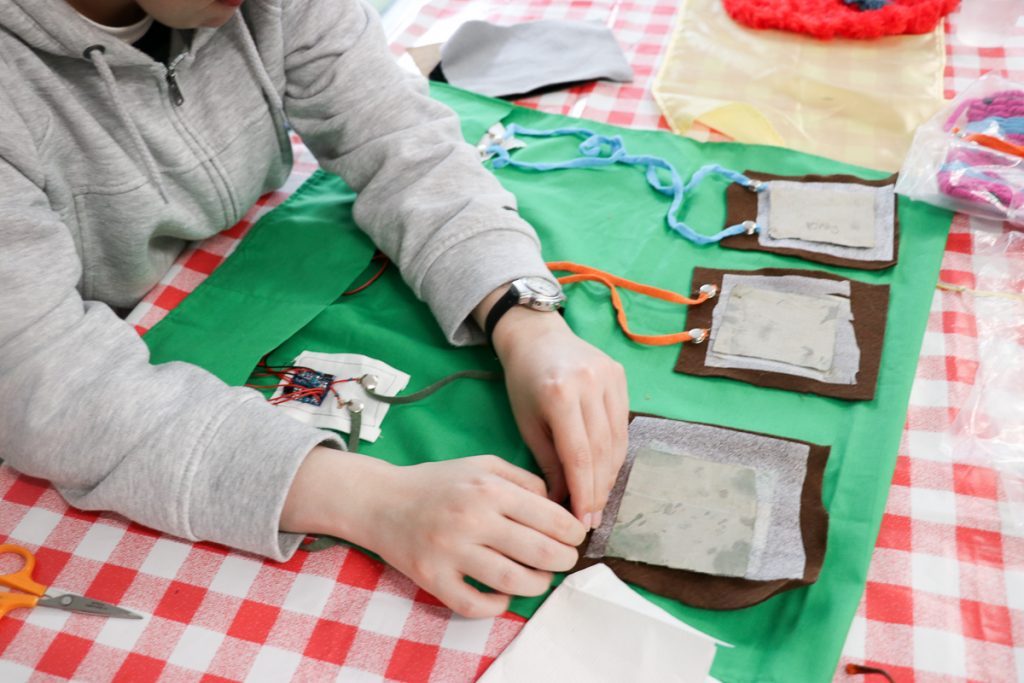 Some of the participants added additional, non-interactive elements to their work, made from crafting materials such as beads, flowers and little wooden shapes. 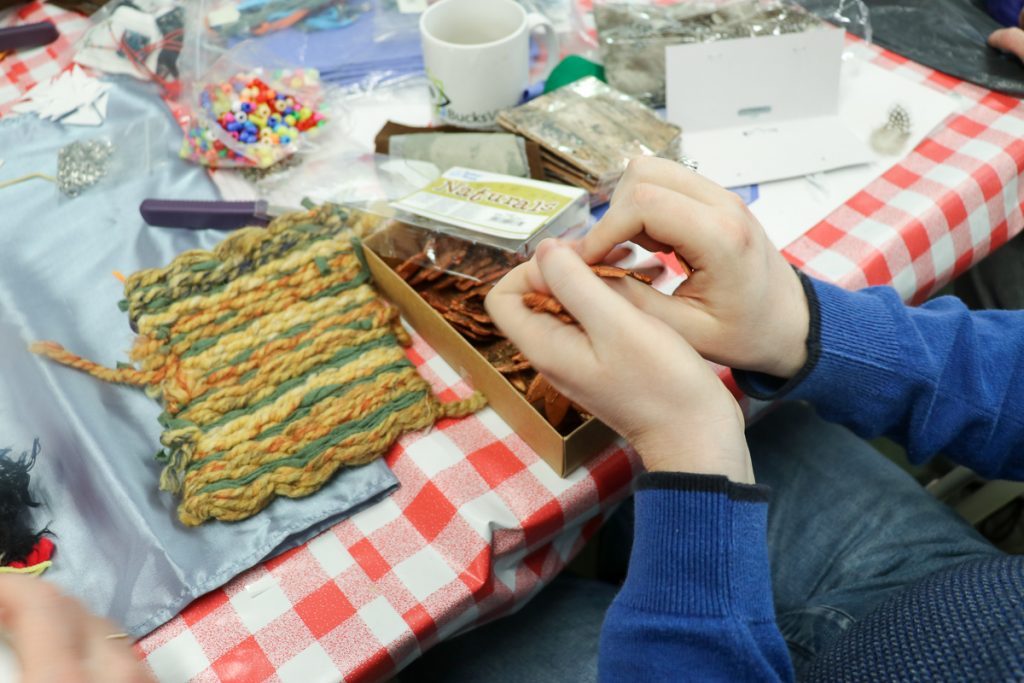 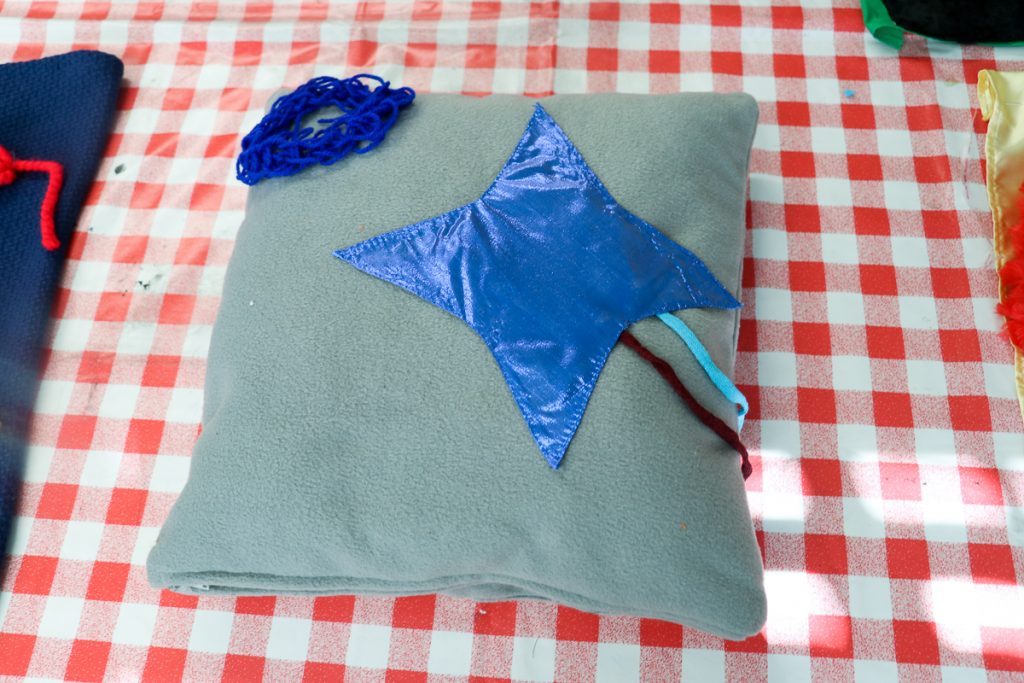 It was great to see all the hard work come together and by the end of the workshop produce such a diverse collection of e-textile art pieces – all working, and all personal to the maker. The participants had chosen a wide range of themes: children, the rainforest, a seascape with a trawler and lighthouse, a tribute to grandparents, family and friends, favourite pets and animals. 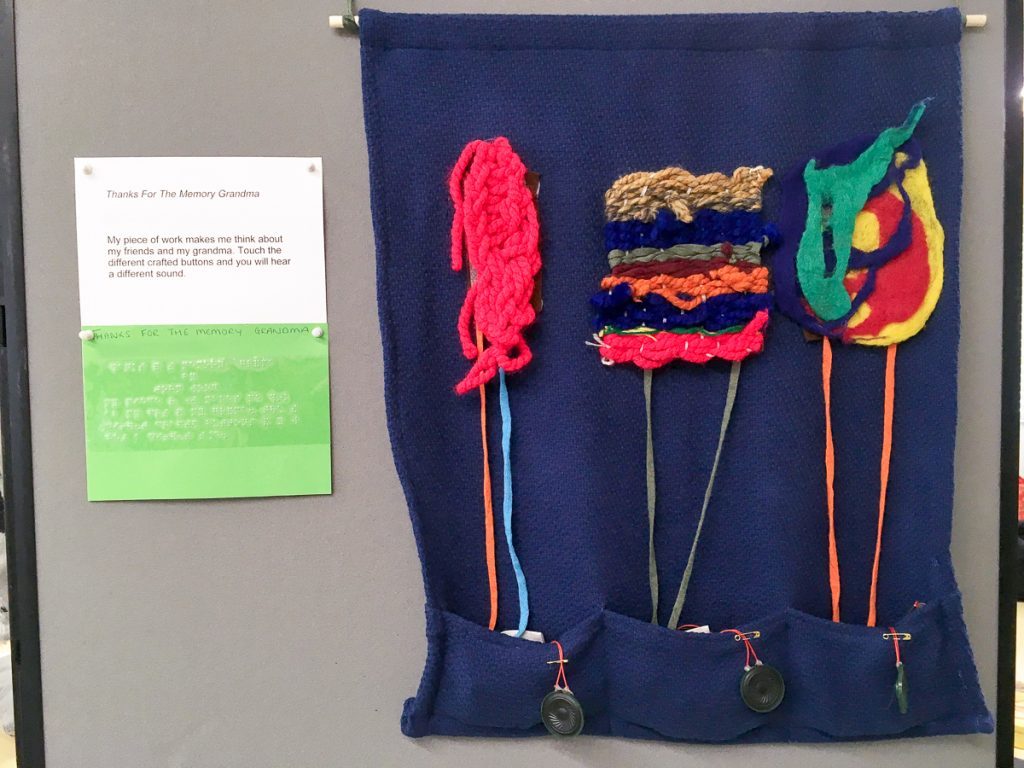 We also held an informal showcase of the work, for which the participants wrote descriptions of their creations. As they presented their pieces, they conveyed their pride in the interactive objects, and they shared their stories with the audience.

We are currently in the process of analysing data from the last workshop but have some early insights; weaving is most certainly the most accessible and enjoyable crafting technique that we ran with the group. It was thought that finger knitting and felt making would be accessible as well, but the participants found these frustrating. Participant’s pieces very much revolved around themselves or a loved one, whether this be a pet or human family member. When presenting their work, it was apparent that each person felt a sense of achievement with their creation, with some participants inviting friends or family members to the showcase. Further workshops are planned, as part of the broader research programme. Each provides more information about how to structure workshops to empower participants to express themselves creatively, which materials and techniques are most accessible and productive, and how people construct interactive objects to evoke and communicate their own stories.