I’ve always been interested in working with groups of people who might not have access to working with, or experiencing creative technology through social or physical barriers. Before my PhD, I co-ran an education company called Codasign which taught participants of all ages and abilities how to work with computer programming and electronics for creative projects. This might be anything from using e-textiles to make an interactive accessory to using Scratch to make a video game. We were successful in receiving a grant from the Digital Makers Fund through a proposal to take digital making to museums, art galleries and organisations which had arts education programmes but had not been running any arts and technology workshops. One of the organisations that we partnered with was Project Ability in Glasgow. They are a visual arts organisations that work with people with disabilities and mental health issues. It was a wonderful experience to see how young people who might not always have the opportunity to access what we did to create such amazing work and so I decided that I would like to do similar projects in the future.

As well as this, I was approached by Prof. Janet van der Linden at The Open University (my now PhD supervisor ) to work on a research project exploring how we could make e-textiles more accessible for blind and visually impaired people to work with and explore the creative decisions made especially by touch. We ended up designing an open kit approach with e-textile weaving workshops and collaborated with Sense, the RNIB, the Islington Museum and the Whitechapel Art Gallery to run them. As well as delivering a series of workshops for the research, we also wrote a paper on the project which won the best paper award for at the ACM conference Creativity and Cognition. I decided that I would like to continue similar research through a PhD, continuing to run e-textile workshops with blind and visually impaired participants, focusing on meanings which we link to fabrics, and how we can make tactile interactive art pieces which reflect a personal story or association.

It’s not so much a surprise but more an observation; carrying out research in participatory design which involves hands on making often results in a cycling of mutual learning (Bratteteig, 1997:1) happening between myself, the participants and each other – we all share what we’re doing in the workshops and reflect on methods and techniques for using tools and materials as well as the creative process. As well as getting some interesting findings for my research questions there have also been some wonderfully profound examples of creativity which I have observed or discussed with the participants – this always inspires me as an artist and researcher!

Are there any restrictions or boundaries you (have to) abide by?

I try not to think about boundaries – but of course working with people who are blind and visually impaired, whether it be making an installation such as the work for Flatland (which I will discuss at the conference), or running hands-on making workshops as part of my user studies, I try to prioritise the tactile over the visual. But saying that, for my participants during my PhD work the visual has actually been very important as well as the feel of materials so I think all senses need to be considered! Everyone is an individual and so you cannot generalise when making work.

I want to enable creative experiences which embrace other senses apart from sight. A lot of work within e-textiles is very focused on the visual, which is not accessible for everyone. My work aims to address this by exploring how materials feel, and how sound and haptic outputs can be used.

A lot of experiences using technology are also very functional when aimed for people with impairments or disabilities. I am more interested in experiences which utilise technology in a creative way for these users, which I think is less common.

Can you tell us a little about you forthcoming projects (related to accessibility)?

I don’t have any new projects lined up but I have been working on my user studies for my PhD at The Open University. These studies have been focused on making e-textile objects with blind and visually impaired users using hands-on crafting techniques and how personal objects can be made which represent a story or association based on the feel of the material used and sound outputs linked to the person’s tale.

Emily also took part in our conference in 2017. 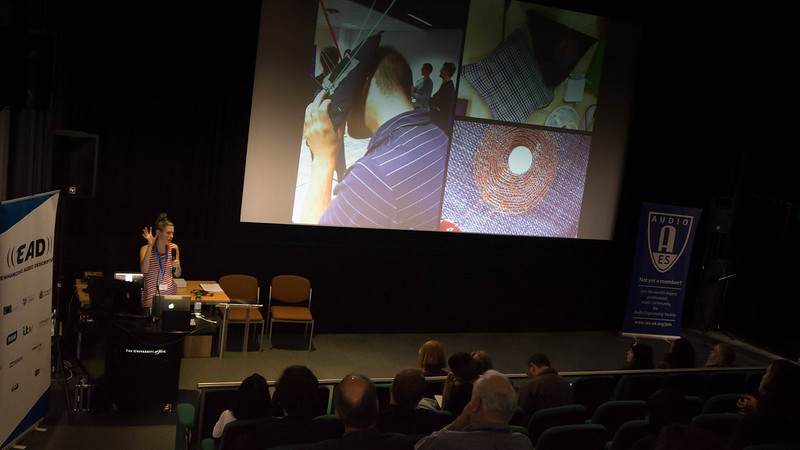