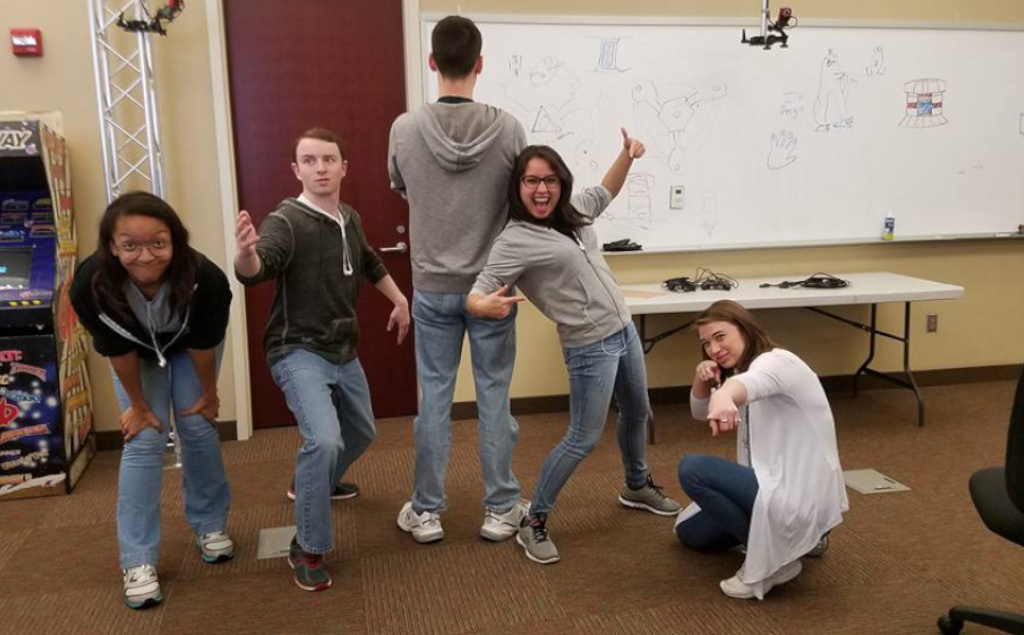 I have always been interested in voice over work, and I was introduced to audio description as another form of work for a voice over artist. While not really knowing exactly what it was, I attended a retreat that trained me to do audio description. Here I met Colleen Connor, a young woman in her twenties who was interested in all types of media. She was one of our instructors and offered many insights about the importance of accessibility from her perspective as someone who lost her sight in college. She told me she missed visual media like video games and movies of course, but what she really missed was being a part of a young community and its pop culture. She’s young herself and she misses out on so much of the world because the world isn’t paying enough attention to her market. She lightheartedly challenged me to create a video game for her, but little did she know, I kept that challenge with me ever since.

The opportunity came to create a video game in our senior capstone class in our game design major. My best friend, Taylor Anderson-Barkley, is a social activist in many ways and was hoping to make a game that would make a difference, and I wanted to make something that would make a difference for the visually impaired community. We gathered a few others to make our team, and the result was Levy.

In the gaming industry, we are of course not the only ones concerned with accessibility. However, we noticed a trend that games that were accessible for visually impaired people were narrative-driven adventures that removed all visuals. Most simulated the “blind” experience for both, sighted and visually impaired players by completely blacking out their screens and conveying the narratives through audio alone.

Razzle Dazzle Games thought that this was not enough. Rather than bring sighted players to an interactive experience by taking away senses to better relate to visually impaired people, we wanted to bring visually impaired players to an interactive experience that was similar to what sighted people were experiencing when they played games. The general population does not realize visual impairment is on a spectrum, and many who are visually impaired still retain some sight. We wanted to add to the existing pool of accessible games by including one that was visual-based and made accessible through the use of audio description like how it is used for movies (which are also highly visual in nature).

Are there any restrictions or boundaries you have to abide by?

The only boundaries we have in our industry are the design principles we believe help make a fun and engaging experience (and the other usual boundaries many other media forms have). Many games are similar with similar mechanics and controls because they have been proven to be engaging and are also what players expect. It can be difficult to create new mechanics and controls when a norm has been established. Therefore, it can be difficult to design truly original games that have done something no game has ever done before. We created a game that is by no means new. We have a campy murder-mystery that relies on finding clues through observation. There are hundreds of games that have done the same. But we tried to be innovative by having the player be an atypical character in the game and by including the aid of audio description.

We hope to encourage discourse about accessibility for visually impaired people, especially in the media form of video games. We are painfully aware that not all games can be made accessible given the nature of certain types of interactivity that are solely reliant on visual cues, but we wanted to show the world that it was possible to create an engaging game that is accessible to the sighted and visually impaired people without taking away from the experience for either type of player. It was important for us to create a game that was different than the other types of accessible works out there to encourage other ways of thinking about accessibility in games and to encourage even more innovative designs for the future.

Can you tell us a little about your forthcoming projects related to accessibility?

As our team was made up of seniors and juniors in college at the time, we have since split up due to the natural course of graduation and have moved on to our own respective fields. However, even though Razzle Dazzle Games has no forthcoming projects, I believe this experience has made us all as individuals more aware and appreciative of accessibility, especially in the realm of video games. I believe all of us will continue to consider accessibility in our future projects.

Kira took part in our conference in 2017.